An international collaboration of astronomers has discovered a binary supermassive black hole in a system that will be a strong candidate for future detection of gravitational waves (GWs).

Blazars which are super massive black holes (SMBH) feeding on gas in the heart of a very distant galaxy, are among the most luminous and energetic objects in the Universe. When the jet, composed of ionized matter traveling at nearly the speed of light, is pointed towards an observer, it is called a blazar. The blazar AO 0235+164 is unique as it is gravitationally lensed by intervening galaxies (phenomenon by which light shining from far away to be bent and pulled by the gravity of an object between its source and the observer).

A group of astronomers from Argentina, Spain, Italy, USA and India has discovered a binary super massive black hole system in the gravitationally lensed blazar AO 0235+164 using extensive optical photometric observations carried out around the globe during last 4 decades (1982 – 2019). They discovered periodic double-peaked flaring events at an interval of around 8 years, and the separations between two peaks of these flares are around 2 years. Five such periodic patterns were detected, and it was predicted that the next such flaring event will occur between November 2022 and May 2025. To confirm the next periodic pattern, a global optical photometric monitoring campaign has been initiated under WEBT (Whole Earth Blazar Telescope) consortium. The observational campaign will be led by Dr. Alok C. Gupta.

Dr. Alok C. Gupta, Senior Scientist from Aryabhatta Research Institute of Observational Sciences (ARIES), Nainital, an autonomous institution of the Department of Science and Technology (DST), Government of India, has participated in this study which has been recently published in the journal Monthly Notices of the Royal Astronomical Society (MNRAS). The study was led by Mr. Abhradeep Roy, a Ph.D. student of the Department of High Energy Physics (DHEP), Tata Institute of Fundamental Research (TIFR), Mumbai. The other members of the Indian team include Prof. V. R. Chitnis, Dr. Anshu Chatterjee and Dr. Arkadipta Sarkar from TIFR, Mumbai.

They expect the next such 2 years long flaring episode to happen between November 2022 and May 2025. An intensive multi-wavelength WEBT campaign will be conducted during this period to test the persistence of this apparent nearly-periodic oscillation (QPO) in AO 0235+164.

The blazar AO 0235+164 is the first binary SMBH gravitationally lensed system, which will be a strong candidate of its kind for future detection of gravitational waves (GWs) using the pulsar timing array and future space-based GW detectors. 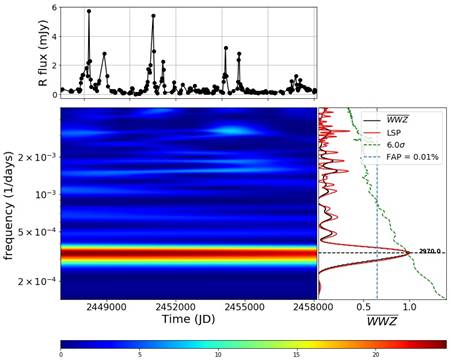